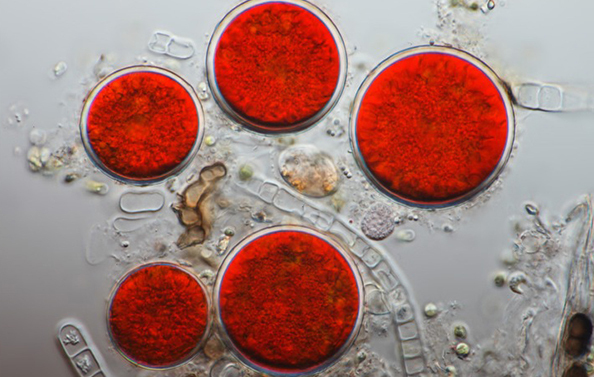 Recent research studies have demonstrated the importance of carotenoids in human health. These carotenoids play essential roles in regulating immunity, reproduction, cancer, age-related macular degeneration, and atherosclerosis. While these studies’ main focus was β-carotene, lutein, and lycopene, there is another compound, astaxanthin, a ketocarotenoid, that is increasingly popular due to its myriad of health benefits and antioxidant property. Astaxanthin is more bioactive than zeaxanthin, lutein, and β-carotene.

Astaxanthin is a red pigment that was first obtained from the lobster. It is found naturally in certain plants, bacteria, and microalgae. The yeast Phaffia rhodozyma and the microalgae Haematococcus Pluvialis are the only microorganisms’ sources that yield an appreciable quantity of natural astaxanthin.  It is primarily present in the marine environment as a red-orange pigment. This red-orange pigment is common to many aquatic animals such as salmonids, shrimp, and crayfish.

Astaxanthin is an expensive compound. The commercial production of this red pigment has traditionally been performed by chemical synthesis due to its cost-efficiency. According to a study, 95% of this red pigment is available in the market is produced from petrochemicals.

The pigmentation strongly determines consumer acceptance of fish. A wild fish obtains its color – a quality attribute- from its prey, which can naturally synthesize a group of carotenoids known as xanthophylls.  These carotenoids provide shade to the muscle and skin of the fish. However, the fishes bred in cages do not have access to these natural carotenoid sources such as crustaceans and other carotenoid-containing-organisms. Therefore, it is necessary to incorporate carotenoids such as astaxanthin in the cultivated fishes’ diet.

There are a substantial number of benefits of this compound for fishes. According to a study, Astaxanthin can reduce oil-induced oxidative stress and lower serum lipid peroxides and transaminase activities in fish.

Astaxanthin for Dogs, Cats, and Other animals:

In the past decade, the compound astaxanthin attracted considerable market interest because of its potential medical uses and pharmacological effects. Astaxanthin possesses several health activities, including anticancer, antidiabetic, anti-inflammatory, and antioxidant activities. It shows neuro-, cardiovascular, ocular, and skin-protective effects.

Like humans, dogs can benefit tremendously from astaxanthin, one of the most potent antioxidants. When dogs or cats age, the ability to produce endogenous antioxidants reduces. This can lead to inflammation of the cornea or grey hairs. Astaxanthin, an antioxidant, serves as a protective shield to protect against free radicals. Moreover, it can also rejuvenate the affected ocular glands.

When the animal ages, the cartilage that cushions bones in joints gradually deteriorates. Various activities like standing up, walking, climbing stairs, and even lowering the head to eat from a food bowl can be painful. Studies suggested that the compound helps prevent joint issues and reduce chronic pain. In addition, it can feed pets to fight various other ailments.